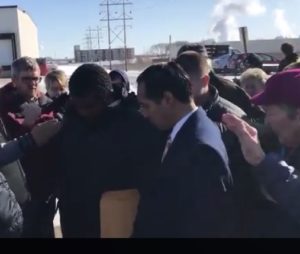 “Jose and his family are simply seeking a better life in this country,” Castro told reporters, “no different from generations of people who have come to this country from different places.”

Castro was there to witness immigration officials removing the GPS ankle bracelet Jose Robinson Palacios said made him feel like a criminal.

The immigrant from Honduras wiped tears from his eyes as he thanked Castro and other supporters who traveled with him to the federal office building.

Castro, who served as President Obama’s Housing and Urban Development Secretary, supports a pathway to citizenship for undocumented immigrants.