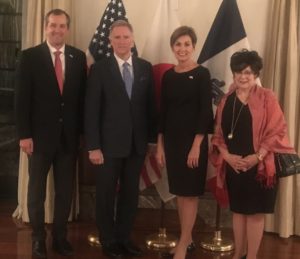 Iowa’s governor and the state’s agriculture secretary are in Japan, meeting with government officials and grocers to tout Iowa beef and pork. Ag Secretary Mike Naig said Iowa meat has been sold in Japan “for decades.”

“It’s about relationships and meeting with customers to hear their concerns, show respect, show appreciation and, again, we’re optimistic that those things will all lead to increased opportunities to move things into this market,” Naig said during a telephone conference call with Iowa reporters.

Naig said he’s optimistic the pending trade deal between the U.S. and Japan will lead to more Iowa meat sales in Japan. Governor Kim Reynolds has met with Japanese businesses to discuss direct investment in Iowa during the trip as well.

“There’s always a lot of follow-up afterwards, but I can’t stress the importance of the face-to-face meetings, especially with our Asian partners,” Reynolds said during the conference call. “It is critical. They expect that and to sit down across from them and have a dialogue and talk about what we’re doing in the state of Iowa and the opportunities that exist are critical.”

The U-S Ambassador to Japan hosted an Iowa reception at his residence in Tokyo on Tuesday evening. Officials from Japan’s government as well as business leaders were there.