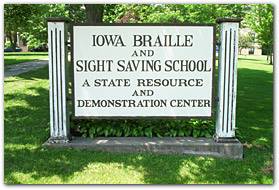 Just one dollar. That’s the purchase price for the deal that will see the State of Iowa turn the former Iowa Braille and Sight-saving School campus over to the City of Vinton.

“The property includes 48 acres and 11 buildings,” says John Nash, director of facilities for the Iowa Board of Regents which has managed the site for decades.

The main building on the Vinton campus opened in 1862. One of the school’s most famous students was Mary Ingalls, the sister of “Little House on the Prairie” author Laura Ingalls Wilder. The number of students living at the school dwindled to just 16 in 2008 and by 2011 the school was closed.

The state signed a lease 11 years ago with the federal government and the site has been used as a regional hub for the AmeriCorps program.

“Before we finalize the property sale, we do have closing documents to complete, including the transfer of the AmeriCorps lease itself from the Board of Regents to the City of Vinton,” Nash says.

The Board of Regents is expected to review and approve the deal during its meeting tomorrow in Cedar Falls. Most states, like Iowa, now offer technical help to school districts where blind or visually-impaired students are enrolled, rather than run a residential school, but there are still about two dozen residential programs in the country that are managed by states or privately run.