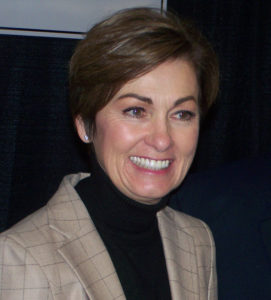 Iowa Governor Kim Reynolds just returned from a trade mission to Japan. Reynolds talked about the mission during an event in Sioux County.

“As we met with the different individuals that are marketing our products, they saw a lot of potential for us to not only capture some new market share, but to also capture some of the market that was going to Australia. So — it was really productive,” Reynolds said.

She says there’s also hope the U-S/Japanese trade agreement will lead to more opportunities. “We were hoping that it would get out of committee while we were there — and did get stalled a little bit. As we talked to the different officials and especially with the Embassy visit, they still felt very confident that it would be ratified in their congress or the DIET. And they wrap up their session round December 5th,” Reynolds said. “So the goal and what everybody felt very optimistic with is that would get it through and it would go into effect the first of January.”

Reynolds says they also had good visits with companies that have invested in Iowa and have businesses located within the Hawkeye state.  “It’s not only exporting our products but looking for foreign direct investment into the state of Iowa,” according to Reynolds. The Iowa governor says the delegation was able to make several pitch presentations as to why Japan would want to consider investing in Iowa.