You are here: Home / Education / Denison students call for outside investigation of diversity issues 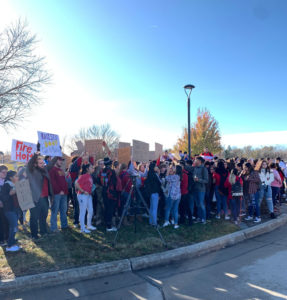 Denison students called for an external investigation of diversity issues.

Students from Denison High School in western Iowa walked out today in protest of a recent incident at the school involving teacher Crystal Holt using the “n” word.

More than 75 students wearing red and black gathered around the Wall of Pride monument in front of the school holding up posters and signs and chanting.

Holt says her use of the word was not a racial slur as it was not directed at a person or an individual and the word was used to teach and help people understand the seriousness of racism in a capital punishment case.

Denison High School senior, Chris Espino gave a speech during the protest as he held up a signed petition. “We the students who have signed this petition, want a supportive educational environment for all students, educators and staff. And we stand firmly behind this belief,” Espino says.

Denison Superintendent Mike Pardon says they are working on the internal investigation at this time and until the investigation is finished he can not comment any further. Law enforcement along with other administration were present to monitor the protest. The protest lasted approximately 35 minutes before the students headed back to class.

(The name of the student in this story was corrected)