You are here: Home / News / Increase in workforce leads to slight increase in October unemployment rate 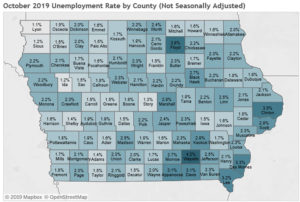 “The rate for October did slightly go up from 2.5% to 2.6%. However, we also saw an increase of just over 9,000 more Iowans in the workforce from September to October, 9,100 to be exact,” West explains. He says they change in the labor force changed the unemployment percentage.

“When you have a large jump in your labor participation rate — 9,100 more folks working — and the number of your unemployed doesn’t change by that much, it’s based on proportions,” West says. “So the number of our unemployed only changed by 900. When you have those factors in place, that can adjust your rate and we think that is what happened for October.”

West isn’t exactly sure where the influx into the labor force came from. “It could be a lot of factors. The Census is going on right now, that could be a part of it. Certainly cyclically where were are it could be campaigns — you could have more people in the state of Iowa working for campaigns. You could have people switching jobs, graduating, maybe graduated in May and are now in the workforce. There’s a lot of factors that go into that,” according to West.

He says there’s occasionally bumps up in the labor force like this. “It’s one of those things that depends on where you are in the year and what’s going on during that time,” he says. West says the unseasonably cold weather didn’t seem to slow the rush of work that usually hits at the end of the year.  He says traditionally in September, October and November before Thanksgiving there is usually a real push to get things done. “So the weather kind of threw us a curve ball a little bit — but not much,” West says.

The unemployment rate had been at 2.5% for three months before this slight move up — and prior to that it held at 2.4% for 12 months. West says the biggest concern still remains finding enough workers to fill available jobs.
“When the unemployment rate goes down, employers need more skilled workers,” West says. “We’ve been kind of in this circle for two or three years now. I think we’ve come a long way during that time.”

West says they’ll continue with programs to improve and upgrade the skills of workers to try and fill the demand with Iowa employers.