You are here: Home / News / Number of Thanksgiving travelers expected to be up 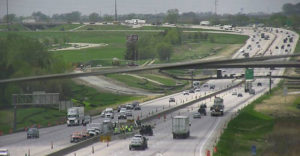 It’s predicted tens of thousands of Iowans will be traveling at least 50 miles from home next week to share a Thanksgiving meal with family and friends.

Rose White, at AAA-Iowa, says the state’s highways and interstates will be especially busy, no matter what the weather forecast may hold.

The motor club says filling the gas tank will be a bit cheaper than Thanksgiving of 2018. “For those traveling by car, gas prices are fluxuating a bit,” White says. “Currently, the national fuel average is 5-cents lower than last year with unleaded averaging $2.59 a gallon. Across Iowa, the prices are about 18-cents lower than the national average, currently at $2.41 a gallon.”

When compared to Christmas and New Year’s, White says Thanksgiving is more condensed, making it the busiest — and potentially the most hazardous — travel holiday of the year. “We do see a high volume of people hitting the roadways during that short window which officially begins on Wednesday and ends on Sunday,” White says. “We anticipate the busiest day for travel will be Wednesday afternoon. We advise people hitting the road to get plenty of rest the night before to prevent drowsy driving, which can be just as dangerous as driving drunk.”

Travel numbers are expected to rise this Thanksgiving, based on several factors. White says consumer spending remains strong, thanks to increasing wages, disposable income and household wealth, and travel remains one of the top priorities for the holiday season.