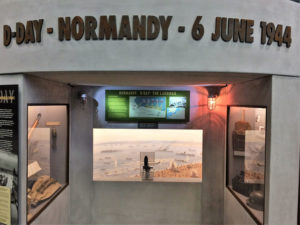 A new exhibit at the Goldstar Museum features the European Theatre in World War II.

A new section is now open at the Iowa Goldstar Museum at Camp Dodge which highlights the involvement of Iowans in the fight in Europe during World War Two.

Museum Curator Mike Vogt says the new exhibit covers 1,000 square feet.  “We have a number of interactive exhibits and some smaller diaramas where visitors can watch a world-wide map and watch the evolution of the war and the antecedent causes of the war, beginning in Asia and then bringing it up to the victory over Japan,” Vogt says.

There’s also an exhibit that features the historic invasion of Europe. “We have a German bunker overlooking a mural of the D-Day Omaha Beach invasion sectors,” Vogt says. “And visitors can look down the barrel of a German machine gun and get an idea of the firepower that was rained down on U.S. troops — Iowans among them — at Normandy.”

It also shows how soldiers arrived via parachute onto the battlefield. They have a mockup of a C-47 plane showing one soldier who has jumped out of the plane and another preparing to do so over Normandy.

More than 262,000 Iowans served in the U.S. armed forces during World War Two and 8,398 were killed. Vogt says it’s important to have an exhibit the chronicles what they went through. “Even if a soldier was 18 in 1945 — if they would have entered the Army at the tail end of the war — that still makes them at least 90 years old today. So, they are a diminishing and vanishing resource,” Vogt says.

There’s also an area that tells the story of the Meskwaki Code Talkers mobilized with the Iowa National Guard, who utilized their native language skills against Italian and German troops in North Africa and Italy. Vogt says having the letters, diaries and interviews from these soldiers available is important. And he encourages you to ask questions of a veteran if you can. 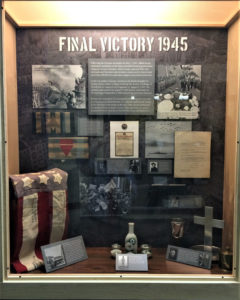 “If you’ve not talked to a World War Two veteran — it’s critically important that you do that,” Vogt says. “Regardless of where they served, when they served or what they did, because within the next decade there’s a good chance there won’t be any of those original participants around to testify and talk about their experiences.”

You can see the exhibit at the Iowa Gold Star Military Museum for free. The museum is open from 8:30 a.m. to 4 p.m. Monday through Friday, and Saturday from 10 a.m. until 2 p.m.