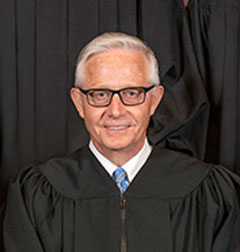 A public memorial service will be held today at Drake University for Iowa Supreme Court Chief Justice Mark Cady, who died of a heart attack Friday.

Governor Kim Reynolds and Cady met quarterly to discuss issues, like their shared passion for criminal justice reform. Reynolds said Cady cared deeply about the state and the courts.

“One of the things that he really implemented that was important to me was the fact that he took the courts on the road,” Reynolds told reporters Tuesday. “And as somebody that comes from rural Iowa, to be able to see justice up close like that I think really was an important thing to do and had a big impact on Iowans understanding the judicial system.”

Reynolds also praised Cady for his role in creating specialty courts that focus on lawsuits involving businesses as well as specialty drug and family courts. Reynolds will eventually name a new member to the state’s highest court to replace Cady, but she said now’s not the appropriate time to discuss that process and focus, instead, on honoring Cady’s life. The justices who remain on the Iowa Supreme Court will vote among themselves to choose a new chief justice.