You are here: Home / News / Iowa cellulosic ethanol plant to shift to research and development 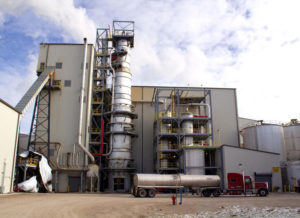 The  ethanol plant in northwest Iowa which makes the fuel from corn cobs and corn stalks is downsizing and 30 employees will be laid off in early 2020.

The POET-DSM’s Project Liberty cellulosic ethanol plant in Emmetsburg broke new ground in the industry according to Hugh Welsh, the company’s president for North America.

“The technological advancements that we’ve already made will pay dividends for decades to come as we move towards a low carbon future, a future that we would move to much quicker if the EPA would do their job,” Welsh says.

Welsh says several EPA decisions have crippled the market for cellulosic ethanol. The plant will shift to research and development and Welsh says the company is looking to license its technology elsewhere.

“As far as jurisdictions outside of the United States, we’ve historically looked to Brazil, to South America, some of the European countries and to China,” Welsh says.

After layoffs in February, just 40 of 70 jobs will remain at the Emmetsburg plant.