You are here: Home / News / Wiggins to serve as acting chief justice of Iowa Supreme Court 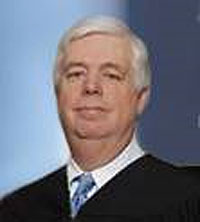 The justice with the longest tenure on the Iowa Supreme Court is now acting as the top administrator of the judicial branch of state government.

Iowa Supreme Court Chief Justice Mark Cady died of a heart attack last Friday. Two years ago, Cady named Justice David Wiggins to act as chief in his absence or inability to act. According to a news release from the Iowa Judicial Branch, that means Wiggins will serve as acting chief justice until the vacancy on the court is filled and a chief justice is selected by the full court.

Republican lawmakers and Governor Reynolds changed the rules for how long a person may serve as chief justice. Under previous practice, there was no limit. Now, the court will select a new chief after the governor appoints a new justice. That person’s term as the top officer in the judicial branch will last until 2021. The justices will be required to take another vote in 2021 on who should be their chief justice. It would be the same person.