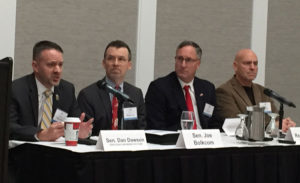 The legislature is not likely to make wholesale changes in the state’s tax credit system according to a panel of lawmakers who spoke today at a meeting of the Iowa Taxpayers Association.

Representative Dave Jacoby of Coralville, a Democrat, used a barnyard epithet — which Radio Iowa has edited for broadcast — to share his opinion.

“I’ll admit this: there are people on both sides of the aisle that are chicken____ to review some of them because they help some of their communities and they afraid that they may not perform as well as they should,” Jacoby said.

Senator Dan Dawson, a Republican from Council Bluffs, said it took two decades to create a wide range of tax credits and legislators shouldn’t shy away from unraveling some of them.

Dawson said some of the credits should remain, however, and Dawson pointed to the tax credit for restoration of historic properties, which he said is popular in rural areas. Dawson was not one of the small group of lawmakers who met three weeks ago to begin reviewing the dozens of credits available to Iowa taxpayers.

A lawmaker who was on the panel says the state will award $434 million in credits in the current tax year.