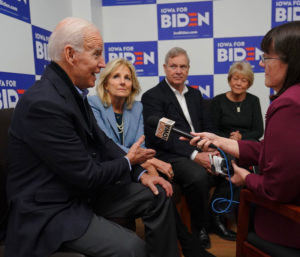 Tom Vilsack said Biden has a unique combination of experience and long-standing relationships with decision-makers around the globe.

“We elected a rookie in Donald Trump,” Vilsack said during a Radio Iowa interview. “We elected a person who had no governing experience, a person that walked into the highest office in the land and the most difficult job in the world with no clue as to what that job was and it’s fairly obvious.”

Christie Vilsack said Biden has ideas focused on rural economic development that will appeal to Iowans.

“That’s a really strong point that we have here, that the vice president has a plan for that,” Christie Vilsack said. “We’ll be out there with the Bidens in the next week or so, in those communities, so we’ll have an ample opportunity to talk about it.”

Biden will embark on an eight-day bus tour of the state next weekend. The former vice president said getting the Vilsacks’ backing is a “gigantic” boost to his campaign.

“The most significant thing that’s happened in this campaign so far in Iowa is these two incredible people endorsing us,” Biden said late this morning. “…The two most respected people in this state…They deeply care about this state. It’s in their blood. It’s real.”

Jill Biden, who has campaigned solo in Iowa on her husband’s behalf, used the word “beloved” to describe the Vilsacks, suggesting character witnesses are important in this election.

“You know, our kids are watching and it’s important they see a president that they can feel proud of and that they can respect,” Jill Biden said. “And, like Tom said, we need somebody with experience and so all those things point to Joe.”

Tom Vilsack served two terms as governor and then served eight years as President Obama’s secretary of agriculture. Vilsack said polling shows Biden has a national advantage in a one-on-one race against President Trump, plus Biden does better in key states that are crucial to winning the Electoral College.

“And then, finally, people know him,” Vilsack said. “They know where he comes from. They know the value system that’s important to them and it’s very similar to their value system.”

Vilsack has suggested Biden has shown a resilience as a candidate and an ability — in Vilsack’s words — to “take a punch.” Biden routinely tells audiences he’s targeted by Trump and Republicans in congress because he has the best chance of beating Trump next November. CNN reports an associate of former New York City Mayor Rudy Guiliani is willing to testify that the top Republican on the House Intelligence Committee went to Vienna last year and met with a former Ukrainian official to try to dig up dirt on Biden.

“Devin Nunes doesn’t surprise me at all,” Biden told Radio Iowa late this morning. “Devin Nunes has never been what you might call the most trusted or honorable person in congress. Now we learned that he was trying to undercut me…to keep me from being the nominee.”

“I must tell you I’m really disappointed in Lindsey Graham. I don’t know what’s happened to him…He’s had this 180 degree turn and I wonder what John McCain is thinking right now,” Biden told Radio Iowa. “John and I disagreed. We fought like hell, but we both were honorable with one another and we never did anything that was anything other than honorable. I just don’t quite get it.”

Both Biden and Graham were invited by the McCain family to speak at McCain’s funeral in Arizona. The Bidens and the Vilsacks spoke with Radio Iowa earlier today between public campaign events in Des Moines and Knoxville.