You are here: Home / News / As much as nine inches of snow predicted for northwest Iowa 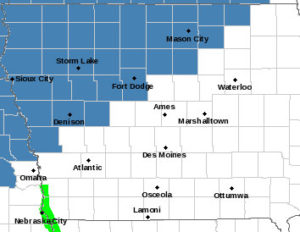 The blue areas on this NWS map are under a winter storm watch.

Forecasters say a storm system will move into the state  Tuesday, with the potential for rain, freezing rain and high winds and well over half a foot of snow in some areas.

Kenny Podrazik, a meteorologist based at the National Weather Service office in Johnston, says a winter storm watch has been issued for the northwest quadrant of the state. “That’s in effect from Tuesday night into mid-day Wednesday and right now we’re looking at a good swatch of three-to-eight inches,” Podrazik says. “Even further west along the Missouri River there, could see up to nine inches. The Sioux City and Sheldon could see up to around nine inches.”

The National Weather Service is predicting near-blizzard conditions in north central and parts of northwest Iowa due to the strong winds associated with this storm on Tuesday night into Wednesday morning. Podrazik says advises finding an alternate route if you’re planning to drive when the storm hits in that area.

“Maybe delay or even move up travel, if possible, because you don’t want to get stuck out in this Tuesday night,” Podrazik says.

The storm’s timing, though, may provide a window for Iowans making shorter trips for Thanksgiving.

“The good ‘silver lining’ part of it is it’s going to happen on Tuesday into Wednesday, so there’s still some time for road crews to kind of clear off the roads,” he says.

Another low pressure system will move into the area as early as Thursday afternoon.

“It will really cause just some periods of rain, snow, wintry mix,” Podrazik says. “The period that we’re really kind of concerned about it the Friday night into Saturday time frame…Even traveling back from where you’re going on Thanksgiving could be a little bit dicey as well, so stay tuned to that.”