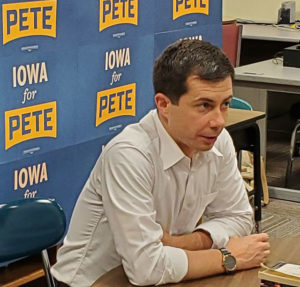 Democratic presidential candidate Pete Buttigieg is campaigning in western Iowa today as he releases a plan to address retirement security and it includes a publicly-managed pension system he calls a “public option 401(k).”

Buttigieg is proposing a new $90-a-day benefit to help cover long-term care. Buttigieg’s father died nearly a year ago and Buttigieg said as he and his mother discussed how to pay for long-term care, a social worker suggested his mother spend all of her assets, so the couple would qualify for Medicaid.

“It’s one thing to hear about these issues in theory. It’s another to find yourself confronting them as a family,” Buttigieg told Radio Iowa. “…I was just thinking: ‘Is that how this works in America?’ This is no way to organize the way our country deals with long-term care, but so many families are in that situation.”

“If we make that simple move and a couple of other tweaks without cutting benefits, we can have Social Security solvent well into the time I’m drawing Social Security,” Buttigieg said, “and I’m the youngest person running for president.”

“We would create a strong incentive to be part of it by requiring that large employers match employee contributions two-to-one,” Buttigieg said. “It’s one more way to make sure that we have not only the baseline floor that Social Security provides, but enough to make sure that everyone can do well and a typical worker, using this public option 401k, would be set to retire with about $500,000.”

Many of the other Democratic presidential candidates have offered proposals on retirement-related issues. Elizabeth Warren and Bernie Sanders are calling for increasing Social Security benefits by between $100 abd $200 a month. Joe Biden has called for boosting survivor benefits for widows and widowers. Biden also proposes an increase in monthly payments to Americans in their 90s who’ve been getting Social Security for 20 years — to help them preserve any savings they may have left.

Buttigieg’s first campaign event this week in Iowa is later this morning in Red Oak,  followed by stops in Creston, Atlantic and Council Bluffs. He’ll campaign in Denison, Storm Lake and Sioux City on Tuesday.