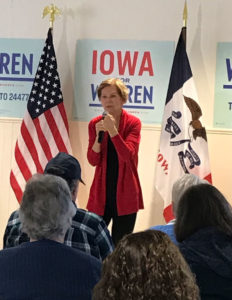 “I am here on day two of Michael Bloomberg’s $37 million ad buy,” Warren said early this afternoon, to chuckles from the crowd.

Warren suggested Bloomberg is making a high-stakes bet that “bags and bags of money” are all he needs to win.

“I think Michael Bloomberg is wrong and that’s what we need to prove in this election,” Warren said, to cheers. “His view is that he doesn’t need people who knock on doors, he doesn’t need to get out and campaign with people, he doesn’t need volunteers and if you get out and knock on a thousand doors he’ll just spend another $37 million to flood the airwaves and that’s how he plans to buy a nomination in the Democratic Party.”

Bloomberg has criticized the new “wealth tax” Warren has proposed for Americans with fortunes above $50 million. Bloomberg, who campaigned in Virginia today, has suggested the Democratic Party is at risk of nominating a too-liberal challenger who cannot defeat Trump.

“If Michael Bloomberg’s version of democracy wins…it’s going to be about which billionaire you can stomach going forward,” Warren said, “because believe me there are plenty of billionaires who think they should be president or at a minimum picking the president, but not me.”

Ken Kennard of Ankeny was among a small group of undecided Caucus-goers invited to hear Warren speak and he joined others in applauding her remarks. After the event, Kennard said he “wholeheartedly” agrees with Warren’s critique.

“The money in politics is destroying democracy,” he said. “Who wants a person who can just buy an election and just swamp us with bumper-sticker slogans?”

Pete Buttigieg campaigned in western Iowa today. During a campaign stop in Creston, Buttigieg said he’s always glad to see another mayor run for office — Buttigieg is mayor of South Bend, Indiana. But Buttigieg said there are three tickets out of Iowa on Caucus night, and he’s campaigning here to win one of them.