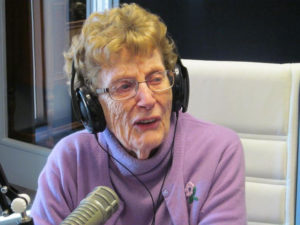 She’s been a staple for housewives and avid readers for nearly seven decades, but 100-year-old Evelyn Birkby is ready to say “goodbye” to her loyal readers.

Birkby’s final “Up a Country Lane” column appeared in today’s edition of the Shenandoah Valley News Today. Birkby’s weekly column got its start in 1949 in the Shenandoah Evening Sentinel.

“Mr. Archie had put in the newspaper that he wanted a farm wife to write a weekly column,” Birkby said.

Birkby’s husband encouraged her to do it. Birkby’s son, Bob, said his mother got a piece of advice before her first column and heeded that advice through each of her over 3,600 weekly entries.

“He said: ‘Always put in a recipe,’ because people loved recipes and she as she began writing, she also realized that she didn’t know how to cook very well,” Bob Birkby said. “She asked a lot of friends and listeners and readers to send recipes and she would test them on her family and so dinner at our house would often be something that we did not recognize because it was something that she was trying out for the first time.”

Birkby grew up in Sidney as the daughter of a Methodist minister. She attended Simpson College and was briefly a school teacher before having children. Over the years, she’s authored columns in unique settings, including frequently bringing her work on family camping trips that spanned the country.

“The minute I would get that old typewriter out on my picnic table, here would come neighbors who were camping nearby to find out what I was going,” she said during an interview. “Well, if there’s anything that can kill a column, it’s people looking over your shoulder and asking you what you’re up to.”

Birkby said new technology has helped her writing process, as she started out on a manual typewriter.

“I made a carbon copy and filed the carbon copies until one day, computers came into my life and I was delighted,” she said. “It was the smallest computer you ever saw and I loved it because now I had a spellchecker!”

A decade ago, Birkby began losing her eyesight and her son, Bob, has helped type out her columns. Birkby also has appeared regularly on KMA, the Shenandoah radio station — and she’ll continue to make appearances monthly. She plans to keep writing, with her son’s assistance, so she can record some of her favorite memories from the past 100 years.