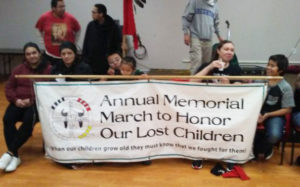 It is the first march since one of the original organizers, Frank LaMere, died in June. His son Manape LaMere says the overnight snowstorm was a challenge the marchers faced, but something his father would have taken on. “Dad had the attitude of always wanting to meet those challenges. And there’s plenty of challenges here in Sioux City that we need to overcome,” LaMere reports.

The march remembers Native American children taken from their homes and placed up for adoption. LaMere says there has been progress on both sides in dealing with the issue but says both sides have work to do.

“Things that the indigenous community needs aren’t just going to be things that are just going to be there and are going to need to be funded all the time,” LeMere says.”Our thought has evolved enough that we want to be self-sustaining in this community. We want to contribute healthily to this community, there’s ways to do that. I think that we will have self-deterimination and self-sufficiency when it comes to mental health — when it comes to the recovery of our brothers and sisters in addiction.”