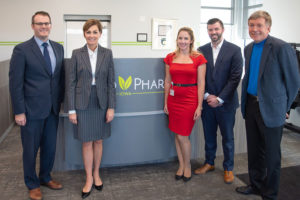 Governor Kim Reynolds has toured the operation in Des Moines that grows and manufacturers the marijuana-infused products that are sold legally in Iowa as treatment for a limited number of health conditions.

“I had not been there before to tour the facility and see what they’re doing,” Reynolds told reporters Tuesday.

This spring the Iowa legislature passed a bill that critics said would have let more potent cannabis products be sold in the state — and Reynolds vetoed it.

“We’re going to continue to work with the legislature and make sure that we look for opportunities to build on the program that we already have in place,” Reynolds said. “We want to make sure that it’s safe, reliable…compassionate… while maintaining the health of Iowans and so part of that is viewing the business.”

Marijuana — for medical and recreational use — will become legal in Illinois on January 1. Reynolds told reporters she will not steer the State of Iowa in that direction.

“I have made it very clear that I am not in favor of legalizing marijuana,” Reynolds said. “I believe they’re going to see all kinds of problems with that in the State of Illinois with that. I believe California is already experiencing some significant problems.”

The manager of “MedPharm Iowa” issued a written statement after the governor’s visit to the company’s marijuana growing facility, saying he looks forward to working with Reynolds and the legislature to improve the Iowa medical cannabis program for all Iowa patients. Under current law, patients with a doctor’s permission slip may only buy cannabis pills, oils and creams if they have been diagnosed with one of 11 conditions or have been told they have a terminal illness. Advocates say cannabis could be helpful for other conditions that aren’t on the list, like post-traumatic stress.

Reynolds’ visit to MedPharm Iowa was not on her public schedule, but the company issued a news release afterwards.