You are here: Home / News / Le Mars church one of many organizations offering Thanksgiving meal 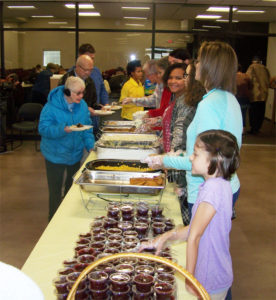 The Rejoice Community Church in Le Mars is expecting some 600 people to come for their annual meal. Organizer Adri Ruisch says the annual event got started more than 25 years ago because of a challenge given to the congregation.

She says they were studying the book “The Purpose Driven Life” by Rick Warren and they were to take a job in the community, and one group decided they were going to do a Thanksgiving meal.

The first one was held at the Knights of Columbus building where 75 people showed up. It was held to offer a holiday meal to the elderly, and under privileged, who may not have family, or unable to visit with family members. She says the mission remains the same for today, but over the years, the Community Thanksgiving has grown, and now anybody is welcomed and encouraged to attend.

Some families make it an annual tradition. “There are some families that make this their Thanksgiving meal. And they just blesses us. We really appreciate that,” Ruisch says. They will gook 56 turkeys, 200 cases of corn 150 cans of cranberries and 16 cases of stuffing. The Pizza Ranch donates the potatoes and gravy.

Ruisch says everyone gets to eat the full Thanksgiving meal for free. “Sometimes people leave a donation and that’s okay — however from the standpoint of Rejoice — we would never ask for money, never,” she says. “And that’s part of the practice that we have. Because when people donate a product — you shouldn’t sell their product, you should give it away.” She says the Rejoice Community Church relies upon the services of many volunteers and businesses for donations in order to have a successful Thanksgiving for the community.

Ruisch says the group is inspired by a biblical verse in Mathew 22. “Go out and invite everyone you can — and that’s taken straight from scripture,” Ruisch says. “We just want to touch lives. And our target population would be those in need and elderly and children, but anybody can come. We have no reason to limit anybody here.”

Serving takes place at the Rejoice Community Church beginning at 11:00 a.m. and will continue until 1:00 p.m. They will also make deliveries of about 300 meals to people’s homes.