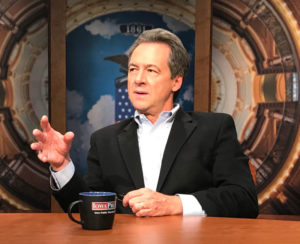 The only sitting governor in the Democratic presidential race ended his campaign early this morning. Montana Governor Steve Bullock entered the race late, in May, after he had taken action on all the bills passed by Montana’s legislature.

Bullock had the endorsement of Iowa Attorney General Tom Miller, who traveled with Bullock on the Iowa campaign trail. But Bullock was only able to meet the criteria to qualify for one of this year’s nationally televised debates. He talked about the process during an appearance on Iowa Public Television’s “Iowa Press” program in mid-September.

“I think the (Democratic National Committee) meant well, but this rule that it becomes all about individual donors, I don’t think is the best way to run a campaign,” Bullock said.

In a written statement released today, Bullock said there were many obstacles he could not have anticipated and it had become clear he wouldn’t be able to break through to the top tier of a crowded field of candidates.

Retired Navy Admiral Joe Sestak, a former Pennsylvania congressman who spent weeks traveling in Iowa this summer, announced this weekend he was ending his campaign.