You are here: Home / News / November was below normal in temperature and precipitation 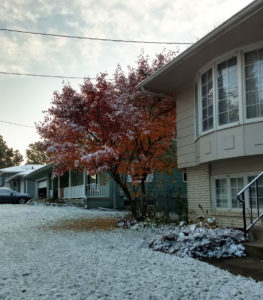 State Climatologist Justin Glissan says November was below normal in a couple of areas.

“Temperature wise — we were at 32.4 degrees Fahrenheit — which is four degrees below average,” according to Glissan. “Looking at the precipitation side of things, we were at 1.4 inches. Which is about six-tenths below average. Snowfall was the one area that was above normal for November. “We had 4.4 inches statewide — which is about two inches above average. And a majority of that fell in the northern part of the state,” Glissan says.

We entered the winter season on Sunday and Glissan says the outlook calls for more precipitation than normal in the coming months. “We’re looking at December, January, February. We do have a precipitation signal in the climate outlook that show us an elevated change of wetter than normal conditions all across the upper midwest. In fact stretching from Seattle all the way to the east coast and down to Missouri,” Glissan says. “So yes, we’re in that higher probability of wetter than average conditions.”

He says there isn’t a clear read on what the temperatures will be like. He says we are in what’s called an E-C or equal chance of above, below or average temperatures moving into winter. Glissan says December is normally the third driest month of the year.