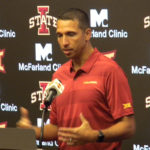 Iowa State football coach Matt Campbell has agreed to a contract extension through the 2025 season.

“I greatly appreciate Dr. (Wendy) Wintersteen’s and (Iowa State AD) Jamie’s (Pollard) proactive approach to extending my contract,” Campbell said. “My staff and I will be on the road this week actively recruiting the next class of Cyclones and it is important for recruits and their families to understand my commitment to Iowa State.”

Campbell guided his 2019 team to a tie for third place in the Big 12 and a berth in a bowl game for the third season in a row. The Cyclones were 7-5 overall and appeared in the College Football Playoff rankings for the third consecutive year.

Details of Coach Campbell’s contract extension will be released at a later date.

The football team will play in a bowl game for the third straight year with the opportunity to achieve three eight-win seasons in a row for only the second time in school history.

Iowa State will learn of its bowl destination Sunday.