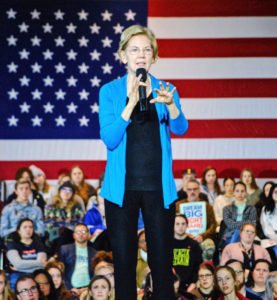 Democratic presidential candidate Elizabeth Warren suggests her plan to eliminate student loan debt may address population losses in rural Iowa. Warren was on the University of Iowa campus Monday afternoon, speaking to a crowd of 650.

“How many folks leave Iowa and don’t come back, right? Think about some of the reasons behind that,” Warren said. “A big part (is) student loan debt.”

“Folks who’ve got to meet that nut every single month are a lot more likely to head out to the two coasts. I hear this from families all over Iowa,” Warren said. “We cancel student loan debt for 43 million Americans, we make it a lot easier for people to decide to live their lives right here in small towns Iowa. I think that’s important.”

Warren spent most of her time on stage in Iowa City, answering questions from the crowd.

“I was wondering what your plans are to make reproductive health care easily accessible to all women,” a woman named Jasmine said to Warren.

Warren replied: “When Donald Trump was elected, I decided I would go to the inauguration, but it was important to me what I wore…I wore my scarf that has in big letters on it embroidered ‘Planned Parenthood.’…I’m going to be wearing that scarf when I am sworn in as president of the United States.”