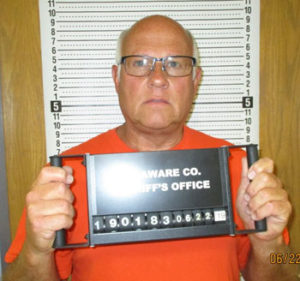 A judge gave the former CEO of the Regional Medical Center in Manchester a suspended 10-year prison sentence Tuesday.

Lon Butikofer pleaded guilty to first-degree theft in October after he was arrested along with former System Fund Development Director Mike Briggs. Their June arrests came after the State Auditor’s Office discovered they received $256,000 in expenses for personal trips they claimed were for hospital business.

Delaware County Attorney John Bernau says Butikofer will serve two-to-five years of probation and restitution that’s yet to be determined. “He was also ordered to pay a $10,000 fine — that’s the maximum fine for a criminal act such as this,” Bernau says. Bernau says there is a 35% surcharge on the fine of $3,500 and court costs too.

The current CEO of Regional Medical Center, Charlie Button, spoke prior to the sentencing on behalf of the hospital and its board and asked for the maximum sentence as a way to help hospital employees and the community move forward. Butikofer also took the stand. He was emotional as he apologized for his actions and the impact it had on the hospital, the community and his family. He described the last three years as “unbelievably difficult.”

The judge noted that Butikofer lived an exemplary life, but then transgressed in a major way — noting it wasn’t just one or two mistakes over a short period of time — but many wrong choices made over an extended period of time. The judge said he felt neither deferred judgment nor prison time was the right choice.

Bernau agreed with the judge. “The judge did a nice job of weighing and balancing all the various factors in this case,” Bernau says. “Clearly it’s an emotional case on both sides — the hospital wanting a much more substantial penalty — and Lon wanting a deferred judgment. The court determined that the proper sentence was a suspended sentence given all the good things he had done in the community — but that he needed to be held responsible for his actions.”

Around two dozen of Butikofer’s family members were present in the courtroom, along with several Regional Medical Center administrators. After the sentencing, Butikofer approached Button and each of his former RMC coworkers with a handshake. He will be back in the courtroom for his restitution hearing on January 21st.