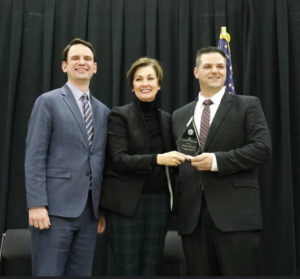 Teacher of the Year George Anderson receives his plaque from the Governor and Education Dept. Director.

A Cedar Rapids Kennedy social studies teacher was named as Iowa’s Teacher of the Year today.

George Anderson has taught for 13 years, and in a video from the Department of Education, says his military career led him into teaching. “As we deployed and traveled places, I found myself always reading about the history and the culture of where we were going. And then as me and my Marine buddies would go places I would say yeah this is where the Punic Wars were fought — and my buddies would call me the professor,” Anderson says.

Anderson says he began to think about teaching career and how many teachers had helped him, and decided it was the thing to pursue. “I decided that I wanted to go back into the community and find those students who maybe aren’t in love with high school or the idea of secondary education or just no real big trajectory in life — an to just try to help those students out,” Anderson says.

He has this advice for those considering teaching. “You are about to embark on an amazing career. This is exciting — there’s no stale days in education,” Anderson says. “I have friends in the business world and when I talk to them ‘ah you know another day in the cubicle.’ We never just have a day of pushing paper.” 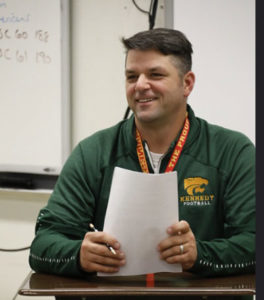 Anderson says the adventure of teaching does include some hard days too. “You are going to have some hard times. I would tell them to embrace the sense of adventure this job has,” he says.

Anderson, his wife, Stephanie, and daughters Summer and Brielle, live in Cedar Rapids. The Iowa Teacher of the Year award was established in 1958. The annual program is sponsored by the Iowa Department of Education through an appropriation from the Iowa Legislature.

The Teacher of the Year travels the state and acts as liaisons to schools, higher education, and organizations across the state.