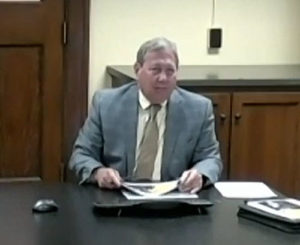 University of Iowa president Bruce Harreld laid out a few more details Tuesday on the proposal to create a public-private partnership to run the school’s utility system.

Harreld says the private company would give the U-I a one-time payment that would be put into an endowment and a new nonprofit organization would then manage the funds. He says they would hire an investment firm and invest the net proceeds and determine the annual allocation to the university. He says those funds would be used to carry out the school’s strategic plan and also provide a subsidy to keep the campus utility costs within historical trends.

Harreld told the Board of Regents the university would take $153 million to pay off the bonds on the utility plant and $13 million  for consulting fees on the plan. He says the remaining invested funds are expected to give a generous return. “It’s a three billion-dollar number. This is how much the endowment must distribute over 50 years in order to cover the cost the strategic plan payments to the U-I, as well as the utility subsidy,” Harreld says. 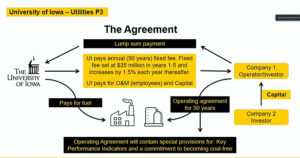 Harreld says it is believe the endowment should be able to create this return. “In the context of 50 years — our modeling projects we would need a roughly four percent return on the endowment,” according to Harreld. “To put that in context, the university has average around eight percent per year over the past decade.”

The board that oversees the endowment would include a regent, a member of the U-I faculty and the U-I senior vice president for finance. The university is not revealing the names of the companies that might be the partners in the project. Harreld says they will not be selling the utilities and the employees of the utility system will not lose their jobs.

The Board of Regents will have to give approval to the plan.

(Photos from the Board of Regents)