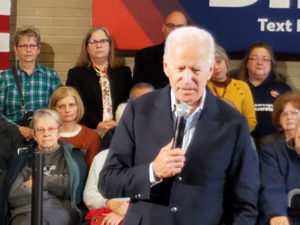 Democratic presidential candidate Joe Biden grew emotional Wednesday as he told a crowd in Ames the Iowa Caucuses will be held on what would have been his son Beau’s 51st birthday.

On occasion, Biden said he thought it would be Beau Biden who’d be running for president in 2020. The former vice president also talked in Ames about his late entry into the race, and suggested most Iowans won’t make up their minds “until pretty late in the game.”

“Democracy, every four years, starts in Iowa,” Biden said in closing his remarks in Ames. “…You are the starting gun.”

Biden told reporters after the event that he spoke with California Senator Kamala Harris Tuesday, after she dropped out of the race. Biden described Harris as a “solid” choice for vice president or the Supreme Court and suggested she can be president herself someday.