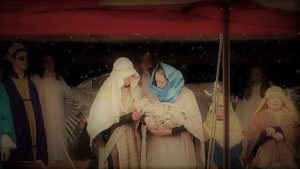 This live nativity scene is on a farm near Scotch Grove.

A crew of 70 people will perform an elaborate outdoor nativity play in eastern Iowa this weekend.

Julia Bean owns the farm near the small community of Scotch Grove where everything’s staged. She says in addition to a manger and live animals, there are streets to illustrate what Bethlehem may have looked like more than 2,000 years ago.

“Like a step back in time,” Bean says. “…We kind of walk our guests through it. It’s fun, but it also helps them learn the experience of what it might have been like to live during that era.”

Julia Bean and her husband, Doug, have been hosting the plays on their farm for several years. Bean recommends an early arrival.

“We distribute gold coins — and I don’t want to get anybody too excited, they’re not real gold — because we ask you to come pay the tax collector and if you don’t pay your taxes, according to Caesar’s rule, you may be put in jail by the Roman guard,” Bean says. “We like to allow a lot of time for that.”

The Bean Farm opens at 1 p.m. on Saturday and again at 1 p.m. on Sunday. The actors perform two shows at the stable, the first at two o’clock and the other starting at four o’clock.