You are here: Home / Agriculture / Iowa Farm Bureau president elected to another term 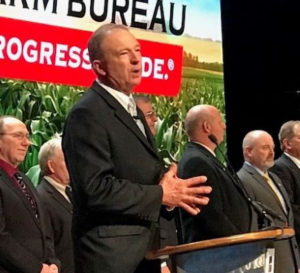 The president of the Iowa Farm Bureau Federation (IFBF) will serve another two-year term after being reelected at the organization’s annual meeting in Des Moines.

Craig Hill of Ackworth took over the top post in the state’s largest farm organization in 2011. Hill started as Warren County Farm Bureau District 8 representative on the state board in 1989, and he later served as the organization’s vice president from 2001-2011.

Hill and his wife, Patti, have a daughter, Abbie, and son, Adam, who helps grow corn and soybeans and raise livestock on their Warren County farm.