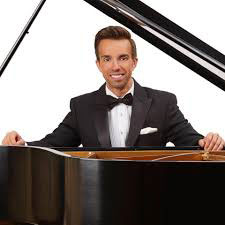 An accomplished musician from eastern Iowa is in the midst of his annual series of holiday concerts across the state.

Jim McDonough, a pianist from Monticello, started the series last weekend with stops in Ottumwa and Davenport and he’s bringing shows to four more cities over the next two weekends. “We’re going to be having spectacular musical arrangements of everyone’s favorite Christmas songs,” McDonough says. “I’ll be joined on stage by my 14-piece orchestra, a cast of singers and dancers who are fully costumed and choreographed, a beautiful stage set. It’s a Christmas production show that happens around the concert grand piano.”

This year’s concert venues include Hoyt Sherman Place in Des Moines, the Paramount Theater in Cedar Rapids and the Gallagher Bluedorn Performing Arts Center in Cedar Falls. “These are beautiful venues that we have a lot to be proud of here in the state in terms of performing and fine arts,” McDonough says. “These are great places to see a show like this, all very accessible and the fact that they are matinees, most audiences appreciate that. Make a day of it.”

McDonough is releasing his 19th album this month, his fifth featuring entirely Christmas music. “It’s entitled ‘Tis the Season’ and it’s a solo piano album of Christmas favorites including some things that folks will hear in this year’s show,” he says. Proceeds from the concerts benefit Camp Courageous near Monticello in rural Jones County. It’s a year-round facility that serves about eight-thousand people with disabilities each year.

This is McDonough’s 17th year of holiday concert tours. All shows begin at 2:30 P-M — at Hoyt Sherman Place in Des Moines this Saturday and the Paramount Theater in Cedar Rapids on Sunday. Next weekend, the shows will be at the Gallagher Bluedorn Performing Arts Center in Cedar Falls on December 14th and at the Five Flags Center in Dubuque on December 15th.