You are here: Home / News / Klobuchar asks Iowans to check out her electoral record 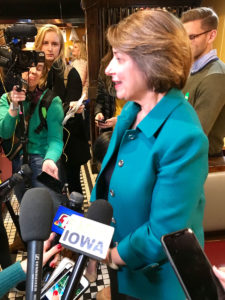 Midwestern neighbors won Iowa’s Democratic Party Caucuses in 1988 and 2008 and Minnesota Senator Amy Klobuchar is drawing crowds of undecided voters who have her “on the list.”

“The ultimate complement in Iowa is: ‘You’re in my top three,'” Klobuchar said, to laughter at an event this weekend. “….One of my arguments I’ll make as I close the case is: ‘It’s time to decide.'”

Ruth Thompson admits she started out with a top six list of candidates and Klobuchar wasn’t on it, then Thompson saw Klobuchar in action this spring, discussing issues with small groups of Iowans.

“She has an approach to getting things done that’s actually achievable and won’t alienate half of the country,” Thompson said.

Thompson and her husband, Scott, introduced Klobuchar to a crowd of about 150 mostly undecided voters on Friday night.

“If you need any more convincing after this event tonight, I want you to call me,” Thompson said and after he gave the crowd his number, Klobuchar quipped, “Say it again,” and the crowd laughed.

Gail Jacobs of Des Moines has been watching the debates and TV ads, but she hasn’t settled on a candidate yet. After seeing Klobuchar speak, Jacobs used the word relatable to describe Klobuchar.

“I’ve liked her policies. I’ve liked what she stands for, but we’re in Iowa,” Jacobs said. “We fall in love and then eventually we fall in line, so we’re in that courtship phase of trying to figure out who we’re falling in love with.”

Denny Van Langen of Urbandale retired at the end of November and has time to check out the candidates on his list.

“I almost feel like I’m fickle because I like every darned one of ’em,” he told Radio Iowa.

“My biggest concern is eletability and I feel like being from the Midwest, Amy could be strong in that respect,” he said. “It might be helpful.”

“We need to look hard at Amy because she can be the voice for all of us,” Craig Floss said. “I see her as being solid in the middle. She’s just a good Midwestern senator and that I appreciate a lot.”

Klobuchar emphasizes her work in the senate, but her closing message to Iowa audiences is about her electoral successes in rural and Republican areas of Minnesota.

“I’ve won not just with woman, but I’ve won big time with men and I think there’s this false perception that a woman candidate isn’t going to bring in male votes,” Klobuchar said this weekend. “You’d better check out my record, because I have.”

Klobuchar won a third term in the U.S. Senate in 2018 by a 24-point margin. She got the support of 54 percent of men who voted and 67 percent of the women in Minnesota who voted.