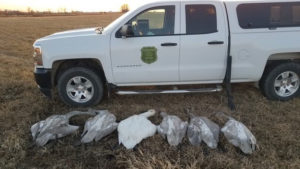 An Ankeny man is accused of shooting these trumpeter swans. (DNR photo)

Acting on a tip, the Iowa DNR sent a conservation officer to Paul Errington Marsh, near Ankeny, on Friday where the officer witnessed a man shooting a trumpeter swan.

As the officer approached, the man shot a second swan and had several others dead nearby. The DNR says 28-year-old Loai Abdulal of Ankeny says he mistook the swans for geese.

Abdulal’s shotgun was seized and if convicted, he’ll face a $1,500 civil penalty for each of the six birds.