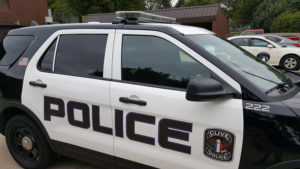 An investigation is underway in central Iowa after a police officer shot a man.

Police in the Des Moines suburb of Clive say the driver of a car refused to stop for a traffic violation on Interstate 235 early Saturday. A brief chase ended with the suspect’s vehicle crashing and two suspects hopping out and running off.

One of the men allegedly pulled a gun as he fled and the officer shot him. His condition isn’t known.

The second suspect was captured. The officer is now on paid administrative leave. No names were released.