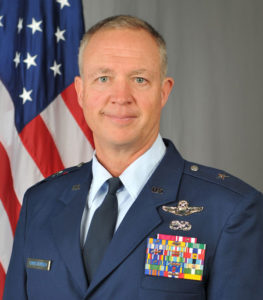 The former Wing Commander of the 185th Air National Guard Refueling Wing has been promoted to Brigadier General and given new duties.

Former Colonel Larry Christensen received his star in ceremonies at the 185th Sunday afternoon. “This wasn’t just about me. This was about my team and the people I have around me. The Midwest work ethic is alive and well today,” Christensen says. “The 185th Air Refueling Wing is a fully operational unit that travels all over the world pretty much all year round. It shows, because this is the third year that we’ve won the outstanding unit award.”

Christensen was presented for his promotion by Major General Moe Sauley, a longtime friend.  “If you look at his biography and the jobs that he has held around the wing — he is the most well-prepared person I have seen to become a general officer,” Sauley says.

Christensen talks about his new duties. “I’ll be the chief of staff down at the Joint Force Headquarters in Des Moines. I’ll still be representing the 185th here in Sioux City, the 133rd in Fort Dodge and the 132nd in Des Moines,” Christensen says.

Christensen is a Sergeant Bluff native who began his military career as a fighter pilot. He has flown the U.S. Air Force A-7 Corsair, the F-16 Falcon and the KC-135 Stratotanker.