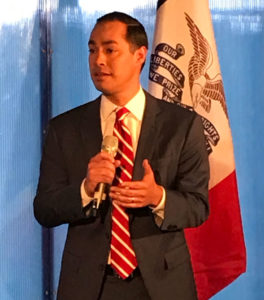 Democratic presidential candidate Julian Castro says Iowa’s Caucuses are too flawed to remain first-in-the-nation in 2024 and he hosted a more than hour-long forum at Drake University in Des Moines this evening to discuss the topic. Castro said Iowa’s racial make-up is not representative of the country and there are too many obstacles that prevent people from participating in the Caucuses.

“If you didn’t know anything about this process and I told you how it was set up, you would think a right-wing Republican set this process up because it really makes it harder to vote,” Castro said. “…Even if you were to keep your first-in-the-nation status…it needs significant change and that’s just the truth whether I’m running for president or you never hear my name again.”

A Latino who did not give her name said “white saviors…who call themselves liberals” are trying to keep the Iowa Caucuses first because they “do not want to give up their power.”

“I would like to thank you for bringing up this important issue because it reminds us how important it is to have representation from people of color in the process,” she said during the forum.

State Representative Ako Abdul-Samad of Des Moines said it’s not the Caucuses that are the problem and the problem isn’t confined to Iowa.

“The problem is the ills that we refuse to deal with and deal with the reality,” Abdul-Samad said. “…What’s stopping the blacks and the Latinos from voting isn’t the caucus, it’s racism.”

Abdul-Samad defended the Caucuses, suggesting the 2008 Iowa Democratic Party Caucus results “sent a message to the country” that a black man could win in both urban and rural areas. Castro said Barack Obama’s historic Iowa victory 12 years ago shouldn’t prevent a discussion about reordering which states go first in 2024.

“If we’re true to our values, we’re going to say: ‘Yes, we can make an improvement,'” Castro said. “And that’s what I hope we do in the years to come.”

Castro began the event by saying he’d had a “fantastic” reception in Iowa and Castro emphasized that he’s not asking that the rules for the current race be rewritten. Castro, the former mayor of San Antonio, has not met the fundraising or polling thresholds to qualify for next week’s televised candidate debate.