You are here: Home / Recreation / Entertainment / DNR ecourages you to plan to take a hike to start the new year 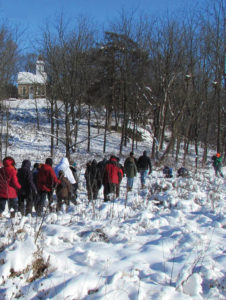 Most Iowans will be off work and out of school on January 1st and they’re encouraged to begin 2020 with a healthy New Year’s Day hike through a state park.

Todd Coffelt, chief of the Iowa Department of Natural Resources’ State Parks Bureau, says this will be the ninth year for the so-called First Day Hikes in Iowa and there are dozens of options from which to chose.

“It’s a fantastic event for family, for friends, for something to do to get the new year started the right way,” Coffelt says. “The big part of this year, we have 49 different hikes all across the state and it’s the kickoff of our 100th anniversary for Iowa State Parks, so it’s a big deal to be a part of it.”

With more than four-dozen hike locations, each event is offering its own take on the trek through the woods, though most are just a mile long with options for longer hikes, depending on conditions. “We have lodges in several of the parks, but not all of them. Those lodges give us a chance to warm up because it’s not going to be 60 degrees and sunny, we all know that,” Coffelt says. “But it gives us a chance to come in there for fellowship, for community gathering, there’s hot cocoa, there’s coffee, there’s snacks.”

Last year, Coffelt says more than 1,400 people took part in New Year’s Day hikes across Iowa, hiking more than 1,100 total miles at dozens of state parks. “Every park is different so every park has something to offer that’s unique to its location and its resources,” Coffelt says. “With the right people, they can give a hike, whether it’s 8 in the morning at Ledges, 9 o’clock at Walnut Woods or in the evening at Prairie Rose where they’re going to do an Owl Prowl.”

The hikers can expect to be surrounded by the quiet beauty of nature in winter, he says, while experiencing spectacular views, beautiful settings and the cultural treasures offered by Iowa’s state parks.