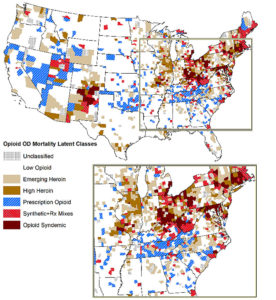 A study of drug overdose deaths finds there several different simultaneous opioid epidemics in the country rather than just a single crisis.

He says the heroin epidemic has taken root in states out west and in the midwest, especially in urban areas near major interstates that experience heavy drug trafficking.

The syndemic exists in counties where the opioid crisis first erupted, particularly in mid-size cities in Kentucky, Ohio and West Virginia that have experienced steep job losses in manufacturing and mining.

Peters says Iowa is a split state when it comes to the drug epidemics. “On the east side of the state….long the Mississippi River, we primarily have heroin counties. Starting in Dubuque and the counties around Dubuque and then to Davenport and some counties in the extreme southeast corner of the state,” Peters says. 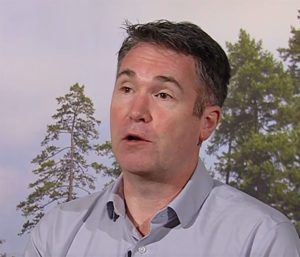 He says the action slows down in the middle of the state. “Most of central Iowa — it doesn’t fall into any one of these opioid epidemics. But on the west side of the state along the Missouri River we have a couple of counties that are plagued by a prescription epidemic,” according to Peters. “So it tends to happen along our borders — on our eastern and western borders — and not in central Iowa. And they are mostly in rural counties.”

He says the evidence of the split shows up in Des Moines. “For example Des Moines doesn’t rank high in terms of opioid overdose death rates compared to some of the smaller rural communities,” he says. Peters says it is important for each area of the state to get a handle on what is happening in their community.

“Instead of taking a more traditional law enforcement approach, really try to work with local social services agencies, local clinics, local churches to try to identify people who are risk for using these highly potent opioids and try to divert them away from usage,” Peters says. Peters and his co-authors conducted a county-level analysis of death certificates from across the country that noted opioid overdoses as the cause of death.

Peters said roughly a quarter of all counties in the United States fall into one of the epidemic categories noted in the study.