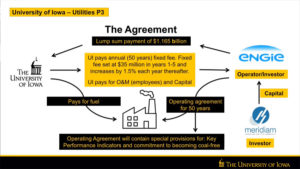 The Board of Regents today approved a plan proposed by the University of Iowa to enter a partnership with a Paris-based energy services company to operate the school’s its utility system for the next 50 years.

“The U-I will then spend the proceeds from that endowment to fund our unfunded strategic plan, which I discussed earlier, targeted at improving outcomes for our students,” according to Harreld. The plan by the Engie company is similar to one it has with Ohio State University. The French company is putting in half of the lump sum payment and the Merridiam investment firm is putting in the other half. 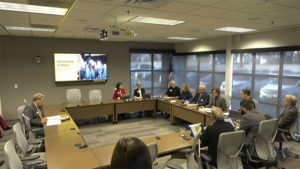 The Board of Regents with U-I President Bruce Harreld to the left.

He says there is an additional benefit to the arrangement. “Over the next 50 years it is projected the University of Iowa’s energy collaborative organization…. will pay 256 million dollars in Iowa taxes that would not have been paid if this deal did not take place,” Harreld says. He says the company will continue forward with the school’s plan to end the use of coal in the power plant.
“They expect to operate the utility system coal-free by 2023 by increasing the use of biomass,” Harreld says. “Not just by substituting natural gas for coal — but jumping to biomass. This is two years ahead of our own internal target.”

The money placed in the endowment fund is projected to increase in value at four percent a year and would bring in nearly $40 million in the first year. The school when then use $15 million from the endowment each year for campus strategic initiatives.