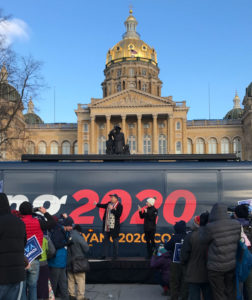 Entrepreneur Andrew Yang celebrated with supporters in Des Moines today shortly after learning he qualified for the next televised debate for the 2020 Democratic presidential candidates.

“The candidate that no one saw coming just beat out a dozen or more senators, governors, congresspeople to make that debate stage,” Yang said, to cheers, “and I will say I am proud to be the only person of color who’s going to be on that stage next week.”

Yang, who was born in New York, is the son of immigrants from Taiwan. He’s the seventh Democratic candidate to reach the threshold of at least four percent in a series of qualifying polls, including a national poll released Tuesday. Yang spoke late this afternoon, in frigid weather, to about 75 supporters gathered around a Yang campaign bus parked near the state capitol.

“We are in Iowa in mid-December. You all came,” Yang said. “…This is the sort of passion and humanity that no amount of money can buy and there are going to be a other candidates who try, but if you have money on one side and people on the other, I think people win every day of the week.”

Yang set out for stops in Grinnell and Iowa City this evening, with more events scheduled Wednesday in Davenport and Cedar Rapids. Yang told the crowd in Des Moines this afternoon that his campaign is focused on the problems that got Trump elected in 2016.

“The problems that led Iowa to go to Trump by eight points and if you look at the national press, when they talk about Donald Trump they make it seem like he is the source of all our country’s problems and we know different. Am I right, Iowa?” Yang asked his supporters. “We know that the problems existed before Donald Trump got here and it’s up to us to shed light on those problems and then solve them to move this country forward. That is what this bus tour is all about!”

Yang is an advocate for a thousand-dollar-a-month government payment for every citizen. Yang says a universal basic income should be one of the government’s responses to advances in technology that are eliminating jobs and causing economic hardship.