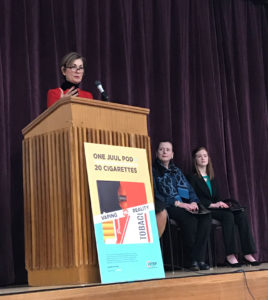 State officials are launching a digital ad campaign about the dangers of “vaping” with electronic cigarettes, hoping to get the message to both teenagers and their parents.

Governor Kim Reynolds today said one out of four high schoolers vapes and the most recent data indicates 29 percent of 11th graders vapes on a daily basis. “That’s an alarming increase in a relatively short time frame,” Reynolds said, “and so that’s why I think it’s just so imperative that we do everything we can to educate, inform and get in front of it.”

“In fact the average nicotine concentration in vaping products sold in the U.S. more than doubled between 2013 and ’18,” Reynolds said. “…With some brands, using just one vaping pod is equivalent to smoking 20 cigarettes.”

Nicotine use while the body and brain are still developing is especially troubling, Reynolds said, and according to the governor many parents may not know their kids are using vaping devices.

“In a national survey of nearly 2900 parents of high school and middle school students, only 40 percent said they could identify a photo of the leading brand of vaping device and 35 percent didn’t recognize the device at all,” Reynolds said.

Reynolds said executive actions by governors in other states to ban or limit the sale of vaping pods are tied up in legal challenges, 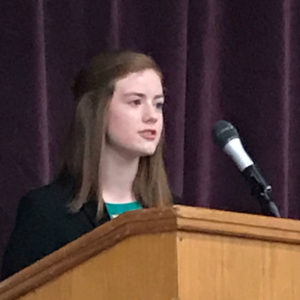 so she’s opted to launch a public relations campaign aimed at both parents and teenagers. Reynolds held a news conference at a middle school in Johnston late this morning to discuss the topic. Courtney Sweet, an eighth grader at the school, is a leader in I-STEP — Iowa Students for Tobacco Education and Prevention, was invited to speak.

“There’s so much information that is misunderstood about vaping: that it is safe, that it’s harmless, that they’re just vaping water,” she said. “Students need to know the dangerous effects of vaping and how it can affect their future.”

Two digital ads produced with state tax dollars are being placed on social media sites like SnapChat, Instagram, and Facebook as well as sites like YouTube and Hulu. Officials did not disclose how much was spent or how often the ads would appear. The governor told reporters if the Iowa legislature votes to raise the age for buying tobacco products from 18 to 21, she’s willing to consider that move as well.

“Here in Iowa, I believe we have an opportunity and a responsibility to do everything we can to put an end to the vaping epidemic,” Reynolds said.

State officials are also reaching out to school nurses with information about what e-cigarette devices look like and advice for counseling students about the negative impact of vaping has on their health.