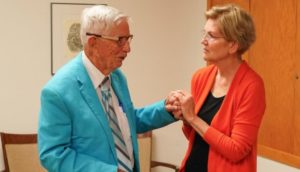 A memorial celebration for former Iowa Congressman Berkley Bedell will be held next summer in the Spirit Lake area.

Iowa District Court Judge Jeff Neary interned for Bedell when Neary was a senior at Westmar College. He later worked part-time for the congressman in his Sioux City office. “He had a reputation of being not often very political and just expected from his caseworkers and staff people to get things done. And to be visible with people and to be out and about and to do the work that was required just to make folks know that they had an advocate in Washington, D.C.,” Neary says.

Neary says Bedell was not perceived as a “traditional Democrat” by district voters and was good at getting things done that were important for northwest Iowans. “And when he helped people, the politics didn’t get involved. And he was very, very sincere about everything he did,” Neary says. “I think he was generally very moderate — and I think that appeals to folks in northwest Iowa. And he put politics aside most times and I don’t think he was a lightening rod like some can be — and that was the focus of what he was all about,” according to Neary.

Bedell last appeared in Sioux City last July to campaign with Senator Elizabeth Warren, who he supported for president.

A visitation for Bedell will be held at Peace Harbor on Highway 86 in Spirit Lake, on Friday, July 24th at 5:00 p.m. A memorial celebration is planned for July 25th at the Spirit Lake United Methodist Church at 11:00 A.M. In lieu of flowers, memorials may be sent to the Foundation for Alternative and Integrative Medicine, P.O. Box 2860, Loveland, Colorado, 80538.