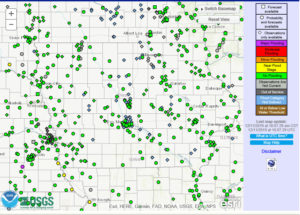 The Missouri River at southwest Iowa’s Fremont County fell below flood stage this week for the first time in 270 days.

Flood warnings have been in effect for the river since March, but it’s now below flood stage from Sioux City all the way to St. Louis. National Weather Service hydrologist David Pearson says it’s not normal for the waterway to be so high for so long.

“It shows just how extreme and how much water had to move through, not just in Nebraska and Iowa, but also in the Dakotas,” Pearson says, “and a lot of the water that went through the river came from the Dakotas.” Sites further downstream have a higher chance of staying above flood stage for longer because more water comes in from smaller rivers. Plus, the amount of water released at Gavins Point Dam was higher than normal, adding even more water to the river.

Pearson says conditions are favorable for another flood early next year, but there’s still a lot of unknowns, like how much precipitation we’ll see this winter. “With the wet soils and a lot of the rivers are higher than normal, those two things alone contribute to an increased flood threat,” he says, “and if we get a lot of precipitation, snow and rain, it will make it potentially that much more worse.”

Fremont County still has standing water over some roads. The river needs to drop even farther for that water to finally recede.