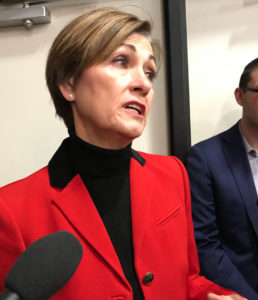 Governor Kim Reynolds says physicians from the University of Iowa Hospitals will visit the state-run Glenwood Resource Center today “to do a review of the patients, look at the charts and just make sure their health is okay.”

The U.S. Department of Justice is investigating the facility, which provides care for about 250 Iowans with profound intellectual disabilities. State officials have placed the center’s superintendent on administrative leave. Federal investigators are examining an allegation of human experimentation on residents at Glenwood. In 2017, five Glenwood staffers pleaded guilty to wanton neglect and eight others were fired or resigned after an investigation.

On Wednesday, Reynolds told reporters there’s been “continuous review” of Glenwood’s operations since she took office in May of 2017.

“We had brought people in, we’d asked them to do an assessment, they’d laid out what they thought was being done, they thought it was appropriate. And you know what? It’s not,” Reynolds said, “and so based on the information that we just received, based on the new leadership at the Department of Human Services…we are making changes.”

Reynolds fired the DHS director this summer and her new director started this fall. A letter federal officials sent Governor Reynolds in November indicates a host of issues have been raised about care at Glenwood, including inadequate nutrition and physical injuries to patients.

Last spring, The Des Moines Register reported current and former staffers at the Glenwood Resource Center raised concerns after an alarming number of patient deaths. Reynolds told reporters on Wednesday that a new team of outside experts are being assembled to dig into Glenwood’s operations. The governor indicated changes will be made in all the institutions managed by the Department of Human Services.

“There are so many opportunities for us to do a better job of serving Iowans and really supporting the employees there. We have hardworking employees that, you know, deal with significant, tough issues and they have not had, I think, the resources, the tools and the leadership and the support that they need to do their job,” Reynolds told reporters. “We can do better and we are going to do better.”

Federal officials are also investigating whether the 180 intellectually disabled children and adults who are patients at the state-run Resource Center in Woodward are being cared for in the most appropriate setting.