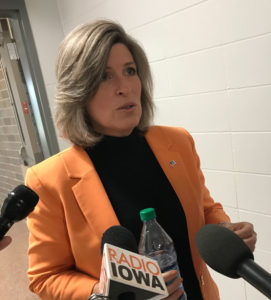 Iowa Senator Joni Ernst says there could be a push for the leader of the Senate to bring up a vote on the U.S.-Mexico-Canada Agreement before the end of the year — but she says the timing doesn’t look good.

“The likelihood of that happening is very, very, slim. It is hard to get unanimous consent on a piece of legislation like the USMCA,” Ernst says.  Ernst is a Republican from Red Oak and says Democratic leaders in the House are to blame for delaying action on the trade deal until now.

“Democrats have really backed us into this corner, they’ve orchestrated this,” Ernst says. “…(House Speaker) Nancy Pelosi is offering political cover by moving on the USMCA. But we’ve got a lot of changes that we have not been advised on yet. We’ll have scrutinize those here in the Senate.”

Ernst says the impeachment trial will take up time along with budget issues. She says she hasn’t seen anything that has swayed her opinion on impeachment. “I’ll be honest — what they have offered up as their articles of impeachment — I don’t see any evidence that supports impeachment at this point,” Ernst says. “Now maybe there’s some rabbit in a hat that Democrats are going to pull out in a trial that might sway members.”

Ernst says the witnesses called by House Democrats all talked about things they heard secondhand or third hand and it wasn’t really based on factual evidence. “I think the trial could be relatively short. I don’t know that additional witnesses are necessary,” She says.

Ernst says the people she hears from in Iowa only have one concern about the impeachment trial. “Get this over with and get your job done. And that is to be working for the people of Iowa. And it is really hard to get things like USMCA done, to get appropriations bills done, to get VAWA (Violence Against Women Act) done when we have the Democrats who are pulling these slick maneuvers,” according to Ernst. “So I am very focused on getting through the trial and moving on ahead with what Iowans want us to be focusing on — which isn’t the trial.”