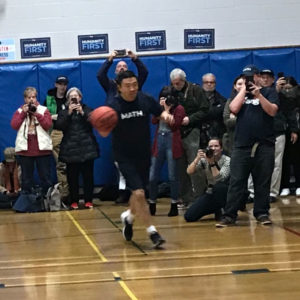 Andrew Yang on the basketball court.

Today is a sporty day on the campaign trail for Democratic presidential candidate Andrew Yang.

Yang is going to the Iowa-Iowa State basketball game in Ames tonight and bought tickets for two supporters to sit with him, but he is careful about taking a side.

“I am pro the State of Iowa and the people of Iowa,” Yang told reporters earlier this afternoon.

Over the noon-hour, Yang played three-on-three basketball at a gym in downtown Ames. The crowd of Yang fans cheered when their candidate banked one in, but when someone tried start a chant of “DEE-fense” it fell flat.

A few moments later, Murphy offered this observation of a move at the top of the key: “Andrew set a screen and gave it off to J.D. at the same time. That was a very nice move by the presidential candidate.”

The J.D. he mentioned is J.D. Scholten, the Democrat who’s aiming for a rematch against Republican Congressman Steve King next November. Scholten, who is six-foot-six, averaged 15 points and nearly 10 rebounds during his senior season at Sioux City East. Yang was on the U.S. national debate team when he was in high school, but Yang did not make the Phillips Exeter Academy basketball team which, by the way, is cheered on with the phrase: “Go Big Red!”

“All of my (basketball) stats are from the weekend league of weekend warriors,” Yang told reporters. 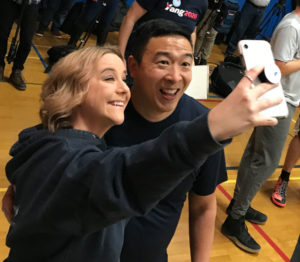 Yang takes a selfie with a potential supporter.

The final score from today’s three-on-three game was 23-to-21 and the candidates were on the losing end.

“Happily, it was supposed to be one-on-one, J.D. against me,” Yang said, “but we wised up to the fact that watching J.D. blast me would not be very interesting for anybody and so then me and J.D. teamed up, just like we’re going to team up to beat Steve King and Donald Trump and solve the problems that we see here in Iowa.”

Scholten has been campaigning throughout the fourth congressional district for months and, as he told a reporter he likes finding time for a pick-up game, he stopped a ball from hitting a camera.

“Balls are flying everywhere,” Scholten told Radio Iowa, laughing. “At least it’s not baseball. Then we’d be in danger.”

After the game, the two shook hands to emphasize points of agreement as a row of cameras captured their comments. Scholten and Yang, for example, have called for increasing the Earned Income Tax Credit and helping those who are eligible claim it.

“J.D. is 100 percent right,” Yang said. “The EITC is one of the most effective ways to get money in Americans’ hands and reduce poverty, so a revved up EITC would be a major step forward for millions of American families.”

Scholten, who has appeared at events with a few other 2020 candidates, will attend his precinct caucus, but said he is focused on his own campaign at the moment. Tonight, though, Scholten’s gaze will be focused on another competition, as he and his dad have tickets to the Iowa-Iowa State game.