You are here: Home / Human Interest / A wonderful neighbor in Webster City pays for everyone to see Mister Rogers movie 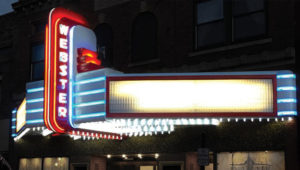 When the movie about the creator and host of TV’s “Mister Rogers’ Neighborhood” opens next week in Webster City, no one will have to pay for a ticket.

In an unprecedented move, the manager of the Webster Theatre says all tickets for all shows for the film’s weeklong run have been prepaid. Ann McLaughlin says it’s a wonderful holiday gift for the town.

“I was approached by a member of the community a couple of weeks ago,” McLaughlin says. “They really loved the whole idea of Mr. Rogers and his kindness and his sense of community and neighborhood. They were really interested in paying for everyone who came to the show, ‘A Beautiful Day in the Neighborhood,’ during the whole week.”

The historic Webster Theater seats 236 people. The movie house was profiled in a 2017 documentary entitled “Made in Iowa.” McLaughlin suggests patrons of the film consider giving their own gifts to the community. “We are planning to accept donations for the food bank,” McLaughlin says, “so if you are coming to the movie and would like to pay it forward, feel free to bring a couple of nonperishable food items and we will take them to the food bank.”

The movie will run in Webster City from December 20th to the 26th. The film, which stars Tom Hanks in the title role, has grossed $43.7 million since opening November 22nd.