You are here: Home / News / Montgomery County to get more broadband through U.S.D.A. program 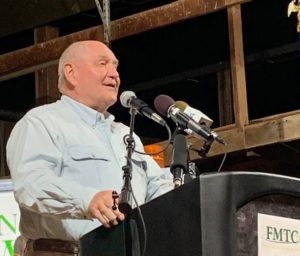 U.S. Agriculture Secretary Sonny Perdue was in southwest Iowa on Thursday afternoon to announce more than $6.4 million in grants and loans to expand broadband service in rural Iowa.

“It makes a big difference in today’s world whether you’re connected or not,” Perdue says. “You know that and we know that. We’ve talked about some of the benefits — telemedicine, e-commerce, connecting to the world way out there, being able to provide and design things that can be sold across the world through the beauty of e-commerce.”

Through the U.S.D.A.’s ReConnect program, FMTC plans to expand broadband services through 214 square miles in Montgomery County and surrounding areas, serving 1,100 customers. Perdue says high-speed internet is also a must for long-distance learning.”Why should kids in rural areas have to drive into somewhere in town into a parking lot to do their homework today?” he said. “Anybody use Google in here? You can’t do that without connectivity, right? And, you know how important that is.”

Perdue says rural broadband expansion is necessary in order for small communities to survive. “It literally is not a luxury any longer, but a necessity,” Perdue says, “if communities want to grow and to thrive and to have economic development.” 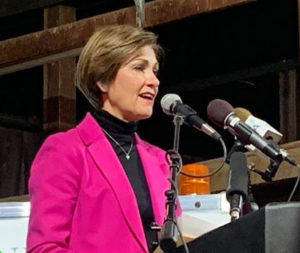 Iowa Governor Kim Reynolds joined Perdue in Stanton. Reynolds praised FMTC for the company’s “innovative, can-do attitude” in connecting the region. The governor says positioning Iowa to lead in the “information economy” is one of her administration’s goals. “From being able to connect our students in the classrooms to cutting edge careers,” Reynolds says, “to farmers checking crop conditions and precision farming, to small businesses processing credit card payments, to being able to sell our products abroad, connectivity is the expectation, no matter where you live.”

The money awarded the company was part of Round 1 of the ReConnect funding process, made possible through $600 million awarded to the U.S.D.A. by Congress in 2018. Cabbage says his company will apply for additional dollars in Round 2, which runs January 31st through March 16th.