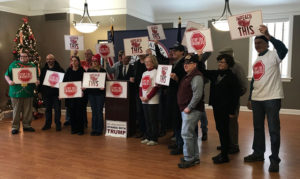 Republican Congressman Steve King has made it clear he’ll vote against impeaching President Trump this week, but the three Democrats from Iowa who serve in the U.S. House have not announced how they’ll vote.

About two dozen people gathered at the Iowa Republican Party headquarters this weekend to show their support of the president.

“I was the only elected official in the state of Iowa who supported Donald Trump in the Caucuses, so I kind of got on board pretty early,” said State Senator Brad Zaun of Urbandale, one of two people to speak at the event.

Zaun said Democrats have been “disrespectful” of President Trump since the day he was elected.

“The day needs to come to stop this ridiculous impeachment,” Zaun said. “They had a lot of hearings. We’ve seen through the news — I don’t have anything other than what you all get to do — listen to the testimony. It’s all hearsay.” 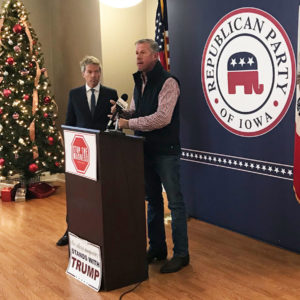 “And I”m just very upset with what our representatives have done out there,” Zaun said. “And I am telling Representative Axne: ‘Listen to us Iowans. We’re sick and tired of this and we want you to go to work.'”

“What are Representatives Finkenauer and Axne doing? Wasting our time,” Branstad said. “Wasting the president’s time. Wasting everybody’s time. We have spent — I don’t know the number — imagine how many hours our representatives in Washington, D.C. have spent on this sham and this hoax.”

Branstad is the oldest son of former Iowa Governor Terry Branstad, who’s now Trump’s Ambassador to China. Neither Branstad nor Zaun mentioned Iowa Congressman Dave Loebsack, a Democrat from Iowa City who is not seeking reelection in 2020.