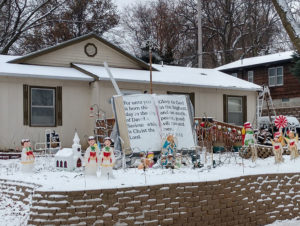 A southwest Iowa man’s front yard is now adorned with what he’s calling the world’s largest Bible as part of a lighted Christmas display.

Albert Morgan says the big book was hand-built by a friend when he lived in Colorado. Morgan has recently moved to Atlantic, so this is the first time the Bible has been visible in Iowa.

“Nine years ago, it was rolled out for display,” Morgan says. “It’s eight feet across, seven feet high and about six-feet deep. It comes in two pieces and each piece weighs about 200 pounds.”

Morgan says he has a disability and is unable to cut wood, so he asked a friend for help creating the giant holy book. “Tim did more than just help, he pretty much took it over,” Morgan says. “He spent a lot of time on it in his garage. He and his wife couldn’t park in his garage for an entire winter and every once in a while, I’d find him running off to the hardware store without me and spending his own money.”

It took about a year to finish. Half-way through the project, his friend was diagnosed with Parkinson’s Disease, but he pleaded with Morgan to let him finish it. Tim, a Vietnam Veteran, now resides in a Missouri Veteran’s home. “He made me promise him that I would not give it away, that I would not sell it and that if I ever wanted to get rid of it, that I would check with any churches that might want to take it over,” Morgan says. “This Bible means more to me than just a Christmas display.”

The huge tome is open to a verse from the book of Luke about the birth of Jesus and the lighted display includes a church, angels and a Nativity scene.